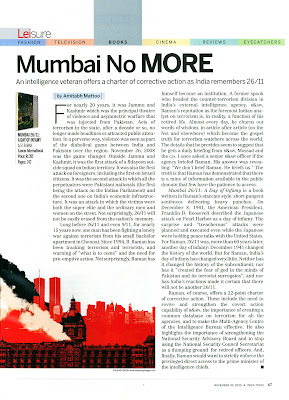 HOW INDIA CAN PREVENT ANOTHER 9/11?

26/11:QUESTIONS THAT NEED TO BE POSED & ANSWERED

The 26/11 terrorist attacks in Mumbai left many important questions unanswered, if not unposed.

What kind of intelligence was available----from the Indian as well as foreign agencies?

How and by whom were the reports analysed, assessed and disseminated?

Were the gaps in the available intelligence identified and was action taken to fill those gaps?

What follow-up action was taken on the available intelligence----however inadequate it might have been?

What action was taken to strengthen physical security----- hotel and coastal security---- in Mumbai keeping in view the fact that the available intelligence---even if general and not specific--- spoke of likely sea-borne attacks on hotels, the Taj Mahal Hotel being one of them?

Who co-ordinated the physical security measures in the Governments of India and Maharashtra?

Some media reports immediately after the attack had quoted a senior executive in the Taj Mahal Hotel as saying that security was strengthened in the hotel for some days before the attack, but was subsequently down-graded. Who took the decision to down-grade physical security? On what basis?

Who co-ordinated the investigation after the terrorist attacks? What was the role of the Government of India in the co-ordination?

Were the foreigners, who escaped from the custody of the terrorists, debriefed thoroughly after they were rescued before they were allowed to go back to their countries? Who debriefed them? Were the debriefings recorded in writing? Where are those notes kept?If they were not debriefed, why? Was their being allowed to leave India without being debriefed due to negligence or was it the result of a conscious decision? If so, who took that decision?

On what basis did the police come to the conclusion that apart from the 10 Pakistani terrorists who came by sea from Pakistan, no other Pakistani accomplice was involved on the ground in Mumbai?

On what basis did the police come to the conclusion that apart from the two Indian Muslims arrested and prosecuted, there was no involvement of any other Indian Muslim?

On what basis did the police come to the conclusion that there was no evidence of any pre-9/11 reccee of the places attacked by the LET or its accomplices?

Did the police seize the guest registers of the hotels attacked, make out a list of persons of Pakistani origin who had stayed there in the months preceding the attacks and verify their background? If so, did the name of David Colemn Headley, who had reportedly stayed twice in the Taj Mahal Hotel, figure in that list? The fact that the Mumbai Police became aware of Headley's stay in the hotel only after they were tipped off by the FBI recently show that the registers were either not scrutinised or were scrutinised superficially.

Did the police seize the immigration records of the Mumbai airport to check the particulars of persons of Pakistani origin who had arrived in the days preceding the attacks and left in the hours following the attacks?

Were the investigators able to get any evidence beyond the confession of Kasab, the lone terrorist captured alive?

2. 26/11 in Mumbai was the most well-planned, well-organised and well-executed terrorist attack since 9/11 in the US. The National Commission appointed in the US made a detailed enquiry into the sins of commission and omission, which made 9/11 possible. Its report was debated in the US Congress and made available to the public. The relatives of US citizens killed by the 9/11 terrorist strikes mobilised themselves to ensure that there would be no cover-up, that the truth would be brought out and that follow-up action would be taken to identify and remove the deficiencies in the intelligence and physical security agencies.

3.The Government of India, by taking advantage of the apathy and confusion in the Bharatiya Janata Party, (BJP), has skilfully avoided any enquiry into the 26/11 terrorist attacks and diverted public attention away from its sins of commission and omission. The Government of Maharashtra did appoint an enquiry committee headed by S.D.Pradhan, former Home Secretary, but its report has been classified and not shared with the legislattive assembly and the public on the unconvincing ground that releasing it could affect the ongoing prosecution.

5. Kavita Karkare, the widow of Hemant Karkare, the brave head of the anti-terrorism squad of the Maharashtra Police who was brutally killed by the terrorists, should take the lead in the matter.

6. I had known Hemant personally. I met him for the first time at a seminar in Bangalore in February last year. I subsequently met him again in Jaipur in May last year after the explosions caused by the Indian Mujahideen. We were in telephonic contact with each other off and on. He never failed to return my calls-----whether they were professional or personal. He was an extremely sincere officer who, like the other officers killed by the terrorists, sacrificed his life in the fight against terrorism. Their sacrifice and the sacrifice of the civilians who were killed should not be allowed to go in vain. (24-11-09)